Feedback loops are crucial when trying to modify a system or build something new. Engineers can only safely move as fast as their comprehension of how a change impacts a system. The abilities and limitations of how computers and humans process information is massively important here; including how feedback information is stored, retrieved, and presented to systems and engineers.

If you’re experienced with continuous integration and developing unit and integration tests then some of this might seem familiar but this article should add breadth and depth to your intuition. We will break down why automated feedback is valuable and how we can go about quantifying which feedback is the most beneficial and useful.

There are three primary automated feedback mechanisms when building and deploying software:

Results from these mechanisms are sent out to teams while they iteratively build, deploy, and run systems in a process that forms a feedback loop.

What Is A Feedback Loop?

It’s the feedback that occurs when outputs of a system are routed back as inputs in a chain of cause-and-effect that forms a loop.

They are used in some iterative improvement cycles such as:

An iterative software development process that emphasizes implementing small vertical slices of a system and getting feedback early. This is similar to doing a “technical spike” where you implement a few steps of a purposed feature to receive feedback, expose any unknowns in the code and architecture, and incrementally add functionality with each vertical slice of an implementation. [1]

Tracer Bullet Development is based on the idea of taking some single feature, single action, single thread of workflow, and implementing it all the way through the system under construction: from UI to database, passing through any middle layers right from the very first implementation on the first day. None of these layers need to be fully functional, but they must be present. Think of it as an extended “Hello, World!” programming exercise. - Andy Hunt, Pragmatic Programmer

These vertical slices of implementation are the tracer bullets. Tracer bullets are rounds that illuminate like a flare and help guide a gunners aim.

Tracer Bullets In Action: Watch the gunner adjust direction after they see the tracer rounds. pic.twitter.com/KlWB8lpLaW

A coding example of this could be adding method “stubs” that return some dummy data or “not implemented” exceptions and gradually filling them in with functionality as needed.

Another example is if your building a web service, start by creating an HTTP endpoint that will respond with an HTTP 200 and simple string like “good” which you can use as a health check. To implement this it would require you to get the basics of your web application framework and server configured, but once you have basics working, this code can now serve as a basic monitoring health check and is a good starting point to start adding more functionality.

A popular lean, iterative development and feedback process. It can be broken down into the following sequence:

These processes become loops since you should generally go back to step one after each iteration by building something again with improved insight.

Find out how it went

Continuous Integration and Continuous Delivery(CI/CD) pipelines are crucial in the iterative development and improvement of software. Continuous delivery treats a deployment pipeline as a “Lean Poka-Yoke”, which is a process where code must go through a set of validations on its way to release.

Poka-Yoke is a Japanese term for a mistake-proofing methodology that is used to help prevent operators from making mistakes in lean manufacturing. The methodology works well in other contexts, such as continuous delivery, since a deployment pipeline can verify that a change is safe before deploying it. There are two types of processes in mistake proofing:

A CI/CD pipeline is a software build and delivery process where changes go through sequential steps to build, test an deploy. They both serve as mistake-proofing process and as a feedback mechanism.

Even more broadly, a pipeline can be modeled as a “Directed Acyclic Graph” (DAG); which is a directed graph with finite nodes and no cycles. Each step in the build process is a node(circle), and the directed edges(connections) lead the code to its next sequential step.

The reason there are no cycles is that if the code fails at any step and needs to be corrected, the newly modified code initiates a brand new pipeline build and must start over from the beginning. The code must proceed through the directed order and cannot arbitrarily move between steps.

If a software change fails at any of these steps, the process stops, and an indicator of the failing step gets shown in a build dashboard, a chat room, and the result can be reported as a failing “check” in a pull request that’ll block it from being merged. While an individual build of the pipeline itself isn’t exactly a cycle, the results of each step are fed back to the people modifying the system, and they use this information to guide subsequent changes. Forming a feedback cycle that looks like below: 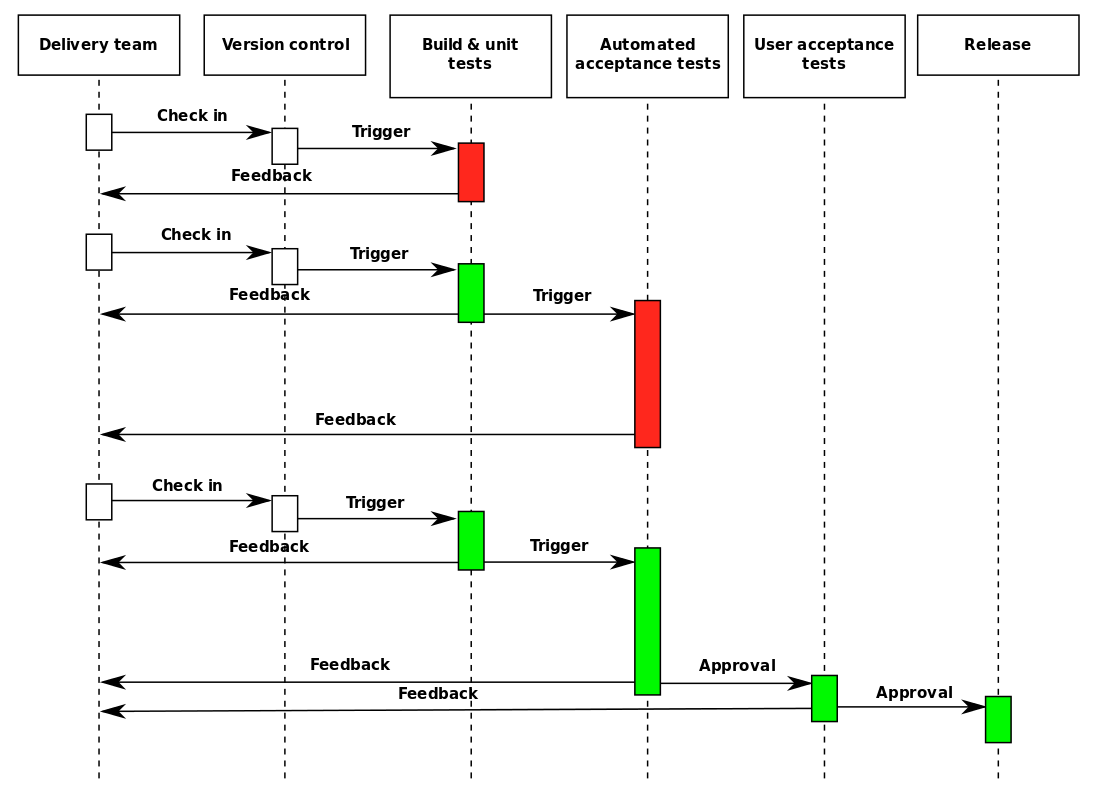 This creates a feedback loop known as a “build cycle”. Each cycle feeds the next with more clarity into what’s happening in the system.

With each build and deploy, we get results.

With those results, we learn and gain visibility into what we should improve.

With our improved understanding from this learning, we make another change starting the cycle over again.

Then another cycle, again, again, and again. Iteratively building, improving, and adjusting to arising circumstances.

Pipelines enable a “virtuous cycle” of iterative development and improvement.

Most iterative development and improvement systems emphasize measurement, learning, and thoughtful improvement. Feedback signals are needed for measurement and learning. These signals can potentially inform us if something is correct or incorrect. While that alone seems helpful, it’s almost worthless if the individuals don’t understand where and why the failures are happening. Further effort is still needed to fix and improve the problems that surface in order to capitalize on the value of this feedback.

Feedback alone isn’t enough; it can be confusing and even harmful if it overwhelms our brains’ ability to process it. For us to have efficient build cycles, we must ensure the feedback from our build cycles and elsewhere is high quality. So what makes feedback high quality?

Useful feedback is about more than is something right or wrong.

High quality feedback is feedback that is:

Low quality feedback is feedback that is:

We must be mindful of the human brains limited capacity to process feedback information. When we overwhelm the senses with information, we increase cognitive load. Cognitive load is the total amount of mental effort required to complete a task that involves processing information.

Essentially when cognitive load increases, we can create an “information overload” that increases our likelihood of making mistakes and interferes with our ability to complete a task.[3] By minimizing the amount of feedback pollution and low quality feedback we expose our software developers to, we lower the amount of cognitive load for them to process and understand this feedback and enable them to make better decisions.

Health consists of the test runtime and stability. Monitor for indicators of instability and slowness. To do this, track information that helps you answer questions such as:

You may want to consider storing results for a significant period of time that will allow you to spot trends. You could store these results in a database that you create and manage for you to query and alert on. If you want something simple and use Jenkins, a plugin like the Test Stability Plugin is a good start.

Access to an engineering teams feedback loop is a privilege, not a right. It’s a privilege that must be maintained

Set stability targets with service level objectives (SLOs) you can use to indicate when tests are becoming too unstable. This will help inform us what a tolerable level of instability for a test is. Tests that touch many components will occasionally fail or perform slowly.

Make it clear if its a developers change that broke a test or if it’s the test itself that’s broken.

Thank you to Ashima Athri for the review of this article and giving me valuable feedback to improve it! You can check our her blog on computer vision and machine learning here: blog.immenselyhappy.com

jump to top of page

[2] Henrik Kniberg, ‎Mattias Skarin; Kanban and Scrum - Making the Most of Both https://www.infoq.com/minibooks/kanban-scrum-minibook